Cryopreservation is the process of placing cells, organs or even whole organisms at low temperatures so that they remain in a state of suspended animation and function is preserved. Cryobiology is a crucial area of research for modern biotechnology due to the importance of biobanking, from developing reliable stem cell storage systems, organ banking for transplants as well as storage for engineered tissues. 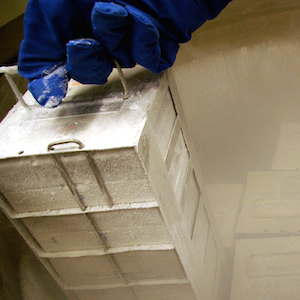 The main obstacle to freezing biological materials is the formation of ice crystals which cause irreversible damage. To address this, vitrification has been developed. Vitrification means turn to glass; it is a process that replaces water molecules with a viscous compound that does not freeze, instead it forms a dense gel at the so-called “glass transition” temperature, around -80 C / -130 C, while retarding the formation of ice. In living systems a large percentage of the intercellular water must be replaced by a vitrifying cryoprotective agent to avoid the damaging effects of ice formation as temperatures are reduced. The glassy, stable vitrified formation is capable of supporting the delicate structures inside cells and the tissue can then be stored indefinitely at super-low temperatures without molecular changes or thermodynamic degeneration. That said, some problems persist. For example, cryoprotectant agents have toxic effects on human tissues with prolonged exposure, through mechanisms still poorly understood. Vitrifying large organs can also result in fractures due to different cooling rates in different parts. Much research is still needed to allow vitrification to become viable for widespread medical use. Although (reversibly) vitrifying small tissues, such as sperm and oocytes, corneas and some cell lines is routinely done, larger tissues and whole organs remain a challenge.

"If at first the idea is not absurd, then there is no hope for it." — Albert Einstein

Cryopreserving whole humans has been attempted for deceased individuals, a procedure known as cryonics. It was first proposed by Robert Ettinger, inspired by Neil R. Jones's science fiction story "The Jameson Satellite." "The Jameson Satellite" tells how Professor Jameson has his body sent into orbit where it remains frozen for millions of years until, with humankind extinct, aliens repair his brain and bring him back to life. Ettinger recognized that Jones had missed an obvious point: Instead of hoping aliens will one day repair one's frozen body, human breakthroughs in technology may one day make it possible for physicians to repair the brain and revive someone long frozen.

In cryonics, after being pronounced dead, patients are perfused with antifreeze compounds (cryoprotectants) to prevent ice formation, temperature is slowly lowered and eventually patients are cryopreserved in liquid nitrogen at very low temperatures (< -130 C), hoping one day they will be devitrified, rewarmed and revived. A couple of hundred patients have already been cryopreserved by cryonics organizations such as Alcor and the Cryonics Institute in the US, and when Ettinger died in 2011 he was cryopreserved, too. With today's technology, cryonics severely damages the body's cells, which means that it will take huge scientific advances, in areas such as nanotechnology, to make these individuals alive and healthy again.

Cryonics has been very controversial. The public in general is skeptic, and even opposed to cryonics, with many considering it a selfish practice. Besides, many scientists doubt whether current cryopreserved individuals can ever be brought to life given the amount of damage endured. On the other hand, in 2004, an open letter on cryonics advocating that it is a legitimate scientific enterprise was signed by 63 scientists, including eminent researchers from Oxford, Cambridge, Caltech, NASA, Columbia University, UCLA, MIT, etc. A person with cardiac arrest was once considered irreversibly dead, but now doctors can bring many of such patients back to life. Although cryonics is not known to be feasible at present (or is even testable since it depends on future technologies), technological breakthroughs in cryobiology may in the future decrease the amount of damage to levels that permit reversible cryopreservation.

If cryonics were viable, it would have tremendous medical applications and huge social and even economic consequences. For example, what should be the legal status of cryopreserved patients? One of the goals of our research network is also to discuss the ethical, medical, legal, philosophical, social and economic implications of technological breakthroughs in cryobiology and cryonics.